Listening to the Rocks

This post is a reflection I shared with the elders in my church this week as we prepare for the launch of a new ministry year. 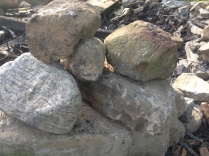 I am intrigued by the repetitive act in the Old Testament where God’s    people would erect stone monuments. Most of the time, these monuments  were nothing more than a few large stones gathered into a pile. They  served as a visual way of reminding themselves (and sometime future  generations) about God’s acts of faithfulness in their lives.

These rock piles show up under Jacob’s ladder, in a place that becomes known as Bethel (House of God). They are piled in the middle of the Jordan river as the people of Israel enter the promised land under Joshua’s leadership. There is even one that gets set up with a name – Ebenezer (literally, stone of help), to commemorate the way God delivered his people from their enemies. There is, in those early generations of God’s people, an awareness that at any moment, God could show up and do something unexpected, some mighty act on behalf of his people. And to help them remember that overarching reality they would chose rocks as witnesses of God’s faithfulness: “Even here, even in this place, God showed up.”

The practice seems to have fallen by the way side by the time the temple is built. The people had arrived in the Promised Land. They still needed God to deliver them from their enemies…and in those cases they often pointed to the temple as the pile of stones that reminded them of God’s previous acts of salvation. But something was also lost during that transition to being a people in a fixed place. God became smaller, more predictable to them. Instead of random encounters with God along the way, the people expected only to meet God in the temple.

Jeremiah saw the danger in locating God in a specific place when he confronted the people on finding their security in the existence of the temple, while living in ways that dishonored God. (Jeremiah 7) Instead of the whole, wild world belonging to God, God’s kingdom became limited to a space – a rather small space in Jerusalem. The temple, which should have reminded the people that the glory of God filled the whole earth, gave them a restricted sense of God’s presence and diminished their willingness to see God as Lord over all of their life. In their living, they treated him as little more than a grand genie in an oversized magical lamp: put out the prescribed offerings on the prescribed days and God will appear when we need him to rescue us.

How profound then for Jesus, during that triumphant entry on Palm Sunday, to reject the rebuke of the chief priests and teachers of the law by saying “If they become quite, the rocks will cry out.” The rocks will cry out. Creation itself will point to God’s untamed yet very tangible and faithful presence among God’s people. The rocks – those lifeless, inanimate chunks of broken earth – recognize and testify to the presence of God and to God’s faithful acts of salvation. And in the presence of mere rocks, we are beckoned to wonder and to remember that God is faithful, far more faithful and present than we have ever dared to imagine. Its part of why the Belgic Confession speaks about God revealing himself through two books – one the holy scripture; the other, creation.

This week, I plan to slip over to Tiffany Falls for a while to read the book of creation as God continues to reveal himself through it. More than the falling water and the trees starting to change color, I simply want to pay attention to the rocks that are scattered along the floor of the falls. It’s unlikely that they have been gathered into piles as signs and witnesses God’s faithful acts, but they are witnesses still the same. Witnesses to God, who has been faithful, for generations upon generations, through upheaval and chaos, through times of peace and rest, through nation state and tribes and unexplored wilderness. The rocks point to the God who remains faithfully present with us.

As we head toward the end of summer and back into the “ministry year” pace, let me encourage you – as time and schedule allow – to go listen to some rocks. Pick one up in your backyard, or maybe stack two or three or ten together in a field somewhere, as a reminder of God’s faithful presence in your life. Together, let’s remember and believe anew that “The whole earth is full of his glory.”