Why I Came Back

“I know you doubt me. I know you always have. And you’re right: I often think of Bag End. I miss my books. And my armchair. And my garden. See that’s where I belong. That’s home. That’s why I came back; because you don’t have one – a home. It was taken from you. But I will help you take it back if I can.”

– Biblo Baggins to Thorin Oakenshield, in The Hobbit: An Unexpected Journey 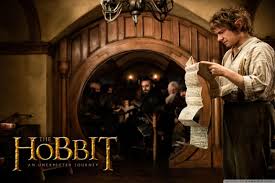 It’s a good movie. Don’t get me wrong. But it’s not been my favorite of Jackson’s renditions of Tolkein’s Middle-Earth. Even after watching The Hobbit a half dozen times or so since it’s release, it’s still not my favorite. But there is something compelling about this story – or this part of the story – that has continued to resonate with me and my understanding of the church’s mission.

I am often looking for metaphors or other images that can help us imagine more fully how we are to live in following Jesus Christ. Biblo’s declaration – “That’s why I came back; because you don’t have one – a home. It was taken from you. But I will help you take it back if I can.” – is one of those images that helps me see more clearly how to live.

Bilbo had every reason  to leave and forget about the dwarves and this adventure that Gandalf had wooed him into.  Thorin had already made it quite clear that he didn’t want Bilbo in the company anymore. In his estimation, Bilbo had made enough blunders and had caused enough stress that Thorin was pretty well convinced the hobbit had nothing of value and that the dwarves expedition would be better off without Bilbo. Before Bilbo got himself or someone else killed because of his naivete, his incompetence, or his lack of ability – as a warrior or a burglar – it would be best if he just went home. If that were not enough, Biblo had just survived a fight with goblins and with the mysterious, narcissistic, and randomly homicidal Gollum under the Misty Mountains. He could spend the rest of his life reasonably justifying a decision to throw in the towel on this adventure and return to Bag End. And what’s more, he now had the one resource that would allow him to leave, to walk away from the dwarves, away from Gollum, away from the chaos undetected. He had the motive and the means to make a safe, comfortable, and respectable life for himself. Any hobbit in his right mind would have turned and made straight for the Shire, allowing for perhaps a short detour to see the elves in Rivendell one last time.

But instead, Bilbo does the unthinkable. He enters the chaos more fully. He takes off the ring and walks back into the company of the dwarves. He binds his future, his story, with theirs. In disbelief, Thorin, who cannot fathom why Bilbo would stay, aggressively demands that Bilbo explain himself. Bilbo’s response is simple and poignant. “You’re right, I have a home…but you don’t. I came back to help you get your home back.”

This metaphor of mission as home making is explored much more fully in Beyond Homelessness an insightful reflection on living as Christians in a culture of displacement by Steven Bouma-Prediger and Brian Walsh. It’s a theme that surfaces throughout scripture and is intertwined with other images and realities like immigration, caring for the Land, and feasting.

If we take the biblical story seriously, we are in many ways immigrants to the gospel and to God’s kingdom. Our home, like that of Thorin and the dwarves of Lonely Mountain, has been lost through our own corruption, greed, and plain foolishness. Jesus entered our chaos. He began that work of making all things new – of making a new heaven and a new earth where he could move into our neighborhood with us. Though it has often been batted around in a rather trite way: We have a home with Jesus. We who were foreigners – and in fact, enemies – to God’s kingdom, have been welcomed in and given citizenship and – to extend the metaphors – we have even been adopted into God’s family. We have a home.

And yet, that’s not the whole story either. Because we have a home, and because God’s work in Jesus Christ is to make all things new, we also have a mission to be about the work that God has been doing. We are called to enter more fully into the chaos that others are experiencing so that the stories of those who are homeless, those who are still caught up in the long chapters of brokenness that have marked this world, become our own. As much as our story has been like Thorin and company, on account of God’s work in Jesus Christ, we are faced with Bilbo’s decision: will we retreat and be content to sit in our home, or will we go forward and enter the chaos and homelessness that others are experiencing.

Perhaps its not a perfect metaphor – but then what metaphor is? But each time I watch The Hobbit, my imagination is kindled and rekindled by that scene and Biblo’s poignant response: “you don’t have a home and I intend to do what I can to help you get it back.” I wonder: is it too far of a stretch to say that the Kingdom of God is like a hobbit who had every reason to ignore and forget about the dwarves and all the resources he needed to live a comfortable life at home, but instead chose to leave the safety of the life he always wanted so that he could journey with the dwarves through their chaos as they worked to reclaim their home in the Lonely Mountain and make it new again?